Just a few weeks until Flying Conquistadors is released! The paperback is already up for pre-order on Amazon, BN.com and my website. The e-version should be available for pre-order on those sites (and on iBooks) shortly.

As I patiently await (ha!) my first book’s birthday, I figured I’d use this space to let people know more about how the book came to be. I also want to pay tribute to the real-life individuals and organizations that inspired this fictional story. 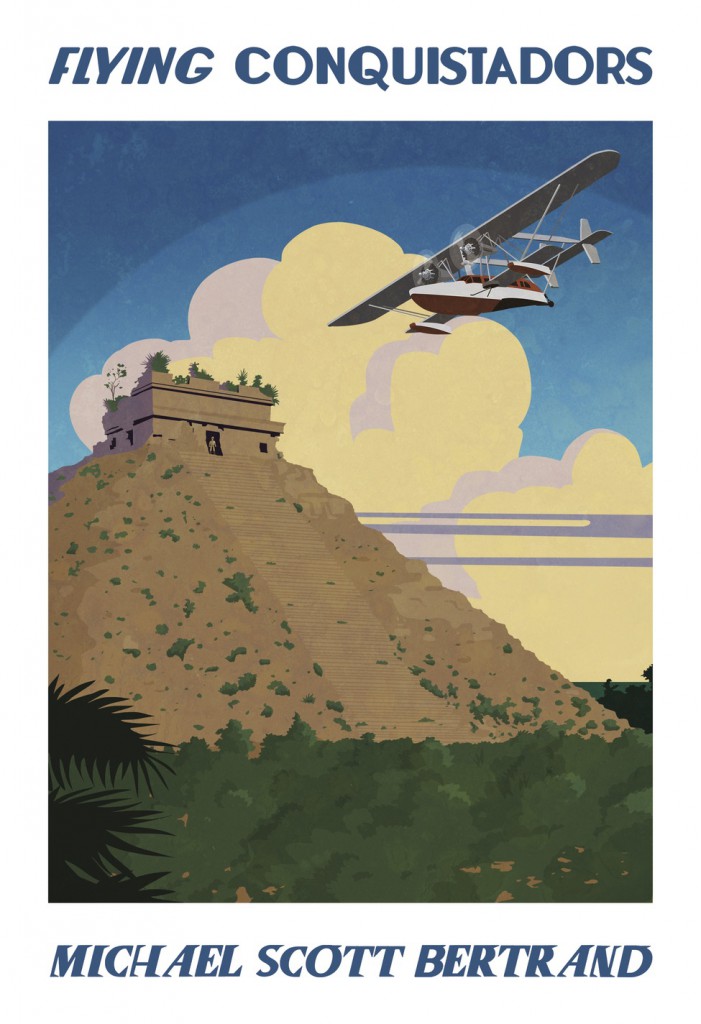 We’ll start with the artwork on the front cover.

The cover of Flying Conquistadors was designed by Alan Flinn (www.alanflinn.com). Alan took a rough idea I had in my head and ran with it. I was beyond pleased with the results, and since the cover was done before I was done writing the book it served as a great personal motivator!

Let’s break this beautiful cover down in a bit more detail:

The Pyramid: Yes, that is El Castillo – also known as the Temple of Kukulcan – from Chichen Itza, located in the northern part of the Yucatan Peninsula. Chichen Itza, perhaps the most recognizable of Mayan sites, has a long and fascinating history: it was an important center of late-period Mayan culture, overflowing with ancient archaeological masterpieces. Like the rest of the Mayan world, Chichen Itza went into decline and was but a shadow of its former self when the Spanish arrived in the early 1500s. The Spaniards attempted to settle Chichen Itza themselves, only to be driven away by continued Mayan assaults.

Deserted, Chichen Itza fell into decline and the jungle slowly took over. The entire site became overgrown with vegetation, the roots taking hold in between the limestone blocks laid by the ancient Maya. Over the centuries, those roots grew and pushed the limestone blocks out, and many of the structures collapsed.

That was the state Chichen Itza was in when two unexpected visitors arrived in the early 1840s. John Lloyd Stephens was an explorer who had gotten himself appointed to a diplomatic post so he could explore and catalogue the Mayan world. He was accompanied by Frederick Catherwood, an artist who used a camera lucida to create unbelievably detailed illustrations of the incredible ruins they came upon. When Stephens’ first book Incidents of Travel in Central America, Chiapas and Yucatan was published, Catherwood’s drawings revealed to the outside world a mysterious “lost” civilization – the Maya – of which little was then known. Stephens’ books, and Catherwood’s remarkable illustrations, would inspire generations of archaeologists and adventurers, eager to see the remains of this ancient civilization. (note: I’ll be posting a longer piece on Stephens and Catherwood at a later date.)

In 1875 French photographer/archaeologist August Le Plongeon and his wife, Alice, made the journey to Chichen Itza, exploring the site and unearthing a “Chac Mool” statue. A few years later the site was visited by explorer Teobert Maler and archaeologist Alfred Maudslay. Maudslay was a pioneering architect, using papier-mache to duplicate carvings and taking numerous photographs of the site. On one of Maudslay’s many expeditions, the below photograph of El Castillo was taken. It almost looks like one of Catherwood’s camera lucida drawings:

I was captivated by the image of this iconic structure in its pre-restoration glory and knew it would be a good model for the cover. You can see how little trees and shrubs worked themselves into the cracks between the stones, and began to eat away at the pyramid itself. And I was intrigued by the little man standing in the doorway of the temple on top. It might be Maler, maybe even Maudslay himself. But I asked Alan to incorporate that little dude into his artwork, as it fit well with my story.

(Full disclosure: Flying Conquistadors is set in the late 1920s, meaning this particular photograph predates my story by a few decades. By the time of Flying Conquistadors, the Carnegie Institution – under the direction of Edward Thompson and then Sylvanus Morley – had almost finished restoring El Castillo to the condition we are familiar with today).

That beautiful bird is a Sikorsky S-38, one of the first widely produced “amphibious aircraft,” meaning it could land and take off on land or water. Pan American owned 24 S-38s, and the aircraft was indispensable as the young airline established routes throughout the Caribbean and then into South America. (Historical note: Prior to the S-38 Pan Am operated a handful of Sikorsky S-36s, a less glamorous but still functional amphibian).

Despite its fame, and the fact that it was the “air yacht” of choice for millionaire and adventurers, none of the 101 original Sikorsky aircraft survived to present day. But two were “re-created” in the 1990s, and one of those two was featured in the Martin Scorsese film The Aviator. It’s the plane used in the scene where Howard Hughes (Leo) takes Kate Hepburn (Cate Blanchett) flying over nighttime Los Angeles. During that scene Hughes reaches down and pulls a pin to move the entire steering column over to the co-pilot’s side, giving Hepburn a surprise flying lesson. That movable steering column was a feature unique to the S-38.

Interestingly, a few years ago the owner of the replica plane used in The Aviator was able to use his S-38 for a transatlantic crossing, taking advantage of some strong tailwinds. My understanding is the plane is now in storage in Florida (note to family: would make a great gift!).

The S-38, despite its modest cabin size, played an outsized role in helping Pan Am during those early days. Getting into it was no easy feet: the hatch for the passengers was located on top of the plane, requiring airline crew to have ladders at the ready. But it was an important milestone in the development of passenger-focused aircraft, and it allowed Pan Am to establish regularly-scheduled flights to locations that didn’t (or couldn’t) have a landing strip. The success of the S-38 led to the creation of the bigger S-40, the first “true” Pan Am Clipper, and those Clippers would in turn revolutionize air travel in the Americas and beyond.

Charles Lindbergh was a frequent operator of Pan Am’s S-38s, not just for mapping out the early routes but also for more relaxing pursuits. He used an S-38 to take Doctors Kidder and Ricketson from the Carnegie Institution on that first archaeological reconnaissance mission over Central America and the Yucatan. Later, after his marriage to Anne Morrow, the Lindberghs and the Trippes used S-38s to tour around the Caribbean and Central America, including the Panama Canal.

It’s a fascinating airplane from a fascinating time in history, and if you are interested in learning more about the S-38 you can find a wealth of resources online. And if you want to see the S-38 in action (and in full living color) click here!

That’s all for today, class . . . remember Flying Conquistadors will be released on March 28th! Thanks for reading! 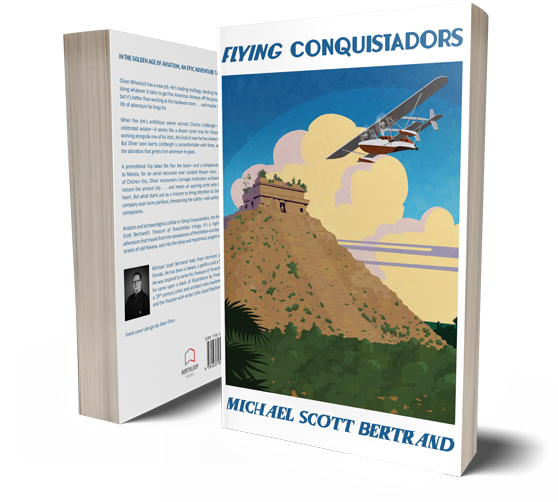